A Pirate's Life for Me!

These are projects I made before I started my blog, but since they are some of my favorite pieces, I felt like it was time to share them.

I'm a huge nerd, and I fell in love with Renaissance Faires a few years back. I wanted to put together an awesome costume, but I wanted to do it on a budget. Believe it or not, if you have some sewing skill, you can do it. Especially if you want to be a pirate.

Goodwill/Salvation army became my best friend. Oversized men's pants can be belted and gathered at the waist to make poofy pants. Peasant skirts can get layered and picked-up in places to make a very gypsy-look. Honestly, if you keep an open mind, anything can become a pirate costume. Oh, and don't expect to do it all in one trip/store. Frequenting the re-sale shops will eventually get you what you're looking for.

Anyways, I have found that the most important piece of any pirate costume is the epic awesome pirate hat. Unfortunately, it can also be an insanely expensive piece. I was willing to shell out up to $100 if I found the exact right hat, but I wasn't seeing anything that I absolutely loved.

Now, I know I'm cheap, and I know that finding anything at a ren faire for under $100 is asking alot, but I have so many costumes that I only wear 2-3 times a year, I can't spend a fortune on them. So I sought out to make my own. Really, I wanted to just find a hat-blank for $20 and build from there, but the cheapest I found (in felted wool) was for about $45.

Hmmm, Felted Wool? I can work with wool, and I can felt it. I thought about it, and went out hunting for a knit/crochet pattern. I ended up at KnitLikeAPirate.com. I found her patten for the tricorn hat, and I thought it was the perfect way to make my own hat-blank.

For my cavalier hat, I worked 1 strand of red wool with 1 strand of black for the first few rounds. For the purple pirate hat, I did 2 strands of purple eyelash along with the 2 strands of black.

I blocked and starched them, but unfortunately they didn't seem to keep their shape very well, so I opted to get some black wire from the florist dept at Joann's, and I hid it around the edge. The purple eyelash hid it on that hat, but I added antique-gold trim on the cavalier hat to better hide it on that one. The buttons on the side were a random assortment of things from my jewelry box, as well as buttons, earrings, chain, and you name it. The feathers also came from Joann's. 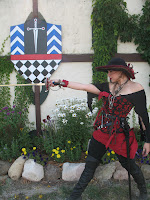 When all is said and done, including the wool, the wire, the buttons, the eyelash, and all the feathers, each hat cost about $40. Still less than the cost of a hat-blank from the faire. Plus, each hat is exactly the right colors and style for the wearer. I love it when I get compliments on the hat, or when people ask where we bought them! Even better, because of the wire, these hats fold flat and can be packed in a suitcase easily. They pop right back into shape when unpacked!
Posted by Andrea at 12:39 PM 2 comments:

So last weekend we threw a big birthday party for my step-mom, Donna. We rented out the banquet room at the restaurant where my sister works, and decorate it in purple, because that's Donna's absolute favorite color.

I was tasked with doing centerpieces, favors, and that sort of thing.

Because it was Mothers' Day weekend as well, I was able to pick up some pots of mums that were purple and very inexpensive. I also made a centerpiece out of "Flower Pens". 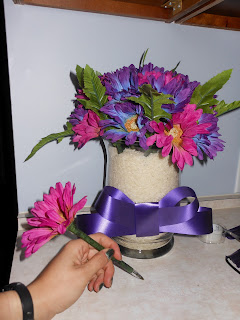 These were so much fun! I bought $1-each10-packs of pens at Meijer, several bunches of clearance flowers from Joann's, along with the glass vase, the ribbon, florist tape and, yup, a bag of rice.

So forgive me for feeling like a genius here, but I think the rice looked really nice for the whole $1.50 it cost to fill the entire jar (with some left over). I was actually going to use white beans, but I thought the rice would hold the pens better. I thought this would be a great idea for you girls planning a budget wedding.

Anyways, I plucked the flower and leaf off the wire stem, and I cut it so that the little loop part cam off the leaf, and the bottom of the flower was as flat as possible. Hot glued flowers to all my pens, and leaves to about half. Once the glue set, I wrapped the pen in florist tape and stuffed them into the vase. It took some time but was ridiculously simple.

Guests were each given a card that had 2 holes punched in the top, and asked to share their favorite memory of Donna. After that, they could take the pen home if they wanted. At the end of the night, Donna read all the memory cards, and we strung ribbon through the holes so that they made a memory book for her to keep.


Saw a swimcuit cover-up on pinterest a while back. Various tutorials (Like this one) are now floating about on how to make one. I figured I'd give it a go.

Problem #1 was not being able to find an affordable fabric that I liked. I wanted a knit, but I couldn't find any solid colors that made me happy. Eventually, I settled on a knit that didn't have anywhere near enough stretch to it, but TOTALLY matched my favorite polka-dot bikini top.

Overall, I took a 1.5 yd rectangle of fabric and draped it around. The upper corners were trimmed off and made way for the straps, and I hemmed the bottom with a rounded shape. I'm not a huge fan of how the top fits in the middle, but I tried it with the straps shorter, and it didn't want to behave in terms of covering the "girls", so I opted for a longer strap that would keep me better covered.

I'm super excited about my trip to Mexico at the end of the month! Hence the fact that I didn't want to wait around to find the perfect fabric. (This was clearance, at $3/yd). However, knowing how simple this was to make, I'd definitely be willing to try my hand at another one, and I'll keep my eyes on the clearance racks and remnant bins.
Posted by Andrea at 4:56 PM 2 comments: 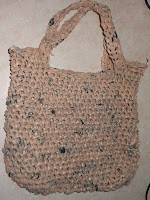 So last weekend, I had a great time volunteering at the Green Street Fair! It was an awesome event! Even though I was there in a professional capacity, I used some of my down time to make an eco-friendly Bag, made out of my plastic yarn. We have nicknamed this project "Bagception" as it is a bag made out of bags.
I finished it last night, and passed it off to my office assistant Kylie, since she wanted one as a beach bag.

I'm in progress on a queen sized afghan for the boyfriend, and another lace brcelet for myself. The afghan is a slow-go, but the bracelet is almost done. I find I need little projects to space my progress on the never-ending ones. I have 2 other projects that are WIPs and gifts, so I can't post those just yet, but there are also a few I've been drooling over on Ravelry and Pinterest.

This EPIC Parasol looks incredible and is made out of cheapo RedHeart, and the best part is that it is a modified FREE Pattern. I love free!

I also found a cool idea, where you Crochet around Rope Lights in a circle to make a glow-mat. I can't see myself using this as a carpet, but wouldn't this be a cool way to make a light for a child's room? I have a few more girlfriends who are expecting yet this summer, maybe that would be an epic baby gift!


I have a pair of Custom Sweater Boots that I've been working on since January, though I put them down since the weather warmed up.

I have been meaning to make myself a cardigan for ages, but it had never happened, and I bought the yarn for a vest as well, and that has also been left to the wayside. Plus I have the sweater I'm knitting for my dad. I've frogged it twice and set it aside more times than that. Who knows, maybe I'll finish it this year....
Posted by Andrea at 2:51 PM 1 comment:

The Struggles of Sewing

So, once upon a time, I was a seamstress.
Not a good seamstress, but adequate.
I made halloween costumes, theater costumes, cosplay costumes, renaissance costumes....pretty much anything that was designed for costume-wear as opposed to real-world wear. Costumes can have a wonky seam here and there, plus you're only wearing them once or twice.

Mainly, the issue with me is that I HATE ironing. And "press seam flat" is every other step in making an actual garment. Bleh.

Anyways, I finally got my new sewing machine set up at the new house, and I decided to sit down and play with it. WHAT A NIGHTMARE!!!! It has been absolutely terrible getting the tension to cooperate, and the only solution I have found is to scratch the bobbin completely and spool up a new one. When it works, it works great, but the littlest thing seems to set it off into "top thread tension" land, and I'm stuck making up a new bobbin. Did i mention that I hate that part too?

Anyways, whilst fighting the tension and getting used to the machine in general, I decided to make up a couple of "I don't care how this actually ends up looking" projects, that are more about function than appearances. Ya know, something to play with stitches and tension before actually making something to show to the public. (despite the fact that i'm totally posting pictures for the whole wide internet to see my shame)

Project #1 - Old t-shirt turned rice pack. I used this pattern which I found on pinterest. Obviously mine didn't turn out half as nice. I also couldn't get the tension right on my machine to stay correct for a single freaking seam. Argh. I did plan to top-stitch the whole thing before I started adding the rice and seams, but I was so frustrated! 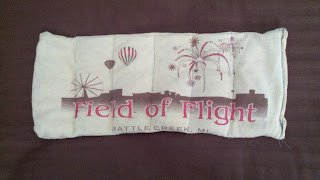 Project #2 - Yoga Pants refashioned from a t-shirt. Finally got the tension working right, and these guys even looked good. Used this tutorial to make the pattern from an existing pair of yoga pants, and this tutorial for how to use a t-shirt as my fabric. Problem: My t-shirt was nowhere near as stretchy as the pants I used to make the pattern, and the finished product was about 4 sizes too small. Boo.

Project #3 - Pincushion. And yes, I know how godawful it looks. I wasn't exactly concerned about it at the time. I wanted to start working on my swimsuit cover up, and my pin container dumped itself out, so I made this out of frustration. It is a strip of 1" elastic to go around my wrist and a remnant of t-shirt sleeve from the yoga-pant fiasco. It may look ugly, but it serves its purpose. 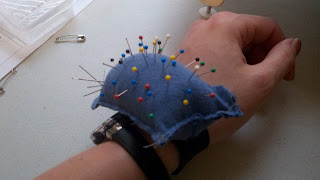 Project #4 - swimsuit cover-up. At least this one was a success! Pictures and details to follow whenever I actually get a chance to wear it!
Posted by Andrea at 3:21 PM 3 comments: