So here are all of the projects that I made for gifts in 2011 (that weren't one of my original patterns). I found all of them through Ravelry, and they all worked up very well.

Yarns: I Love this Cotton (Black) 4oz &Yarn Bee Boucle Traditions (150 yds)
Hook: 4.5mm
Modifications:
I used a larger hook to accommodate the boucle yarn, which made the body very fat. I freehanded the head. Then I ran out of the white fluffy stuff when I got to the head and tail poofs, so buy more than you think you need. I made the feet without the legs, because it looked better with the fat body. 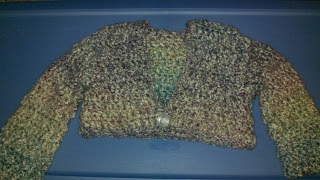 Homespun Bolero
Pattern: Crochet Bolero
Hook: 9.0mm
Yarn: Lion Brand Homespun
Size: Followed measurements for a sz small, ended up with an XS due to less bulky yarn.
Notes: Due to the thinner yarn (bulky as opposed to super bulky) I added some stitches so the measurements would come out correctly.This looks SOOO much cuter when worn. I definitely have to make one for myself!

Ski Trip Snow Hat
Pattern: Talini Hat Pattern for color pattern and Funky Flower Hat for actual stitch count at the top
Hook: 5.0mm
Yarns: Remnants of Red Heart Super Saver and Caron One Pound skeins
Modifications:
Its true, I didn't buy the pattern for the Talini Hat, since I already knew how to make a puff stitch hat, but I did love the stripe pattern, and it was a major inspiration. When I got done with the first stripe pattern, I switched to hdc sts for the remaining rows. The ear flaps are also hdc sts.

Lavendar Ski Hat
Pattern: Ron Weasley Animal Crackers Hat
Hook: 5.0mm
Yarn: Remnants of lavendar baby yarn, and red heart super saver
Notes: This hat was for a friend from my craft circle, who saw a similar hat at a craft fair, and I told her not to spend her money on it when I could make her one. She's also a big Harry Potter fan, so that didn't hurt. It would be nice to make on in the Ron Weasley colors too though. No pattern modifications.

Posted by Andrea at 3:51 PM No comments: