This past weekend was GenCon Indy! Not only was it a fantastic con full of very sort of game imaginable, but there were some excellent costumes!

I managed to pull off 3 costumes of my own, and even though things didn't turn out anywhere close to what I'd planned, I think that they all were pretty good in the end. 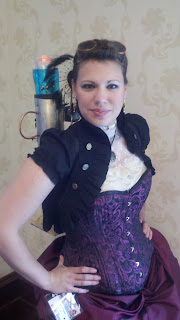 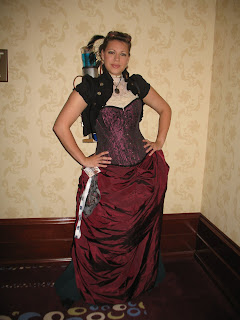 The lace undershirt came from goodwill, the burgundy overskirt is an old bridesmaids dress (pinned up and backwards). The bolero was $15 at Meijer with $2 of buttons sewn on. The corset came from www.corsets-uk.com and the underskirt is from The Painted Lady. Both were expensive pieces, but great with other costumes. The necklace is a yarn-cutter and the goggles were off ebay for $10, then painted with acrylic paint. 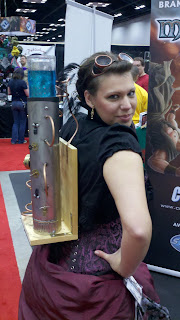 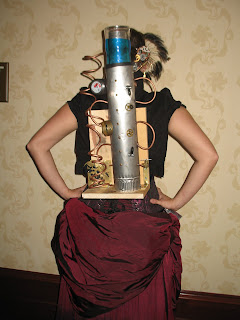 The backpack is built on a simple wooden frame. The silver tube is a piece of ducting from home depot. Add a copper "freezer installation" kit, an kitchen temperature gauge, a freezer mug, and some LEDs to make one Automatic Vodka Distillery (or Bubblegum Recycling Aparatus for the kiddies). I used paper towel to add black acrylic paint as "grease" at the end, and that really made the difference. 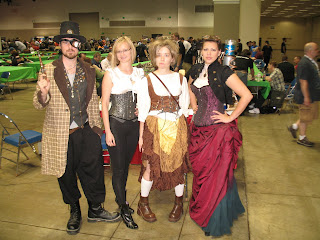 The whole steampunk group looked fantastic. Crystal (the insane one) made her Utili-corset from scrap pleather and random objects. Sam's gun came from spare plumbing parts, and his vest is simply covered in every type of button and bangle imaginable. 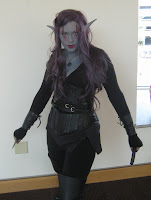 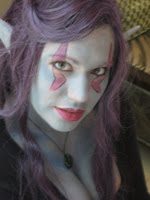 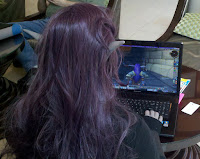 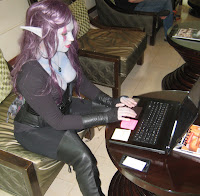 The Night Elf Rogue was a last minute costume. The boots are from RenBoots, the corset is from a company no longer in business (but I've had it for ages). The belt is from target. The gloves are dollar bin gloves cut off, the bracers are sewn from pleather scraps, and the elf ears are from Aradani Costumes (great quality, btw) and I purchased both the ears and the wig on our first day at GenCon. The body paint is a blend of cheap leftover halloween makeup and avon cream foundation in a shade slightly darker than my skin. 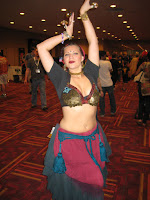 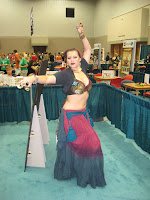 This is my actual bellydance costume that I've been working on for quite some time. I brought it to the con when the set of fairy wings crystal and I were trying to make failed epically, and I gave up on being a fairy completely. The bra was an old one, I cut all the straps off, covered it in scrap black cotton fabric, and replaced the straps with black cotton bias tape. There are about 200 coins sewn on, and I embroidered the design myself. I added beads, buttons, and bangles. The skirt is from Painted Lady (see above link under the steampunk costume), as it the headwrap. The Choli is made out of an old t-shirt with some ribbon, and I will eventually post the pattern for the tassel belt, since I made that freehand. 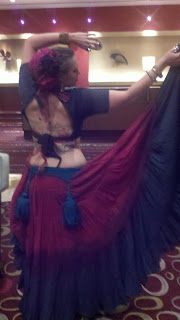