So, maybe technically these aren't a craft, but they are super-useful. Plus you see so many different "this is the best firestarter" tutorials, how do you make sense of it all???

Well, fellow pyromaniacs, I'm here to help.
I've assembled my 3 favorite variations on the DIY firestarter and tested them out.

Cost: Absolutely Free. These were things you were going to throw away anyways. 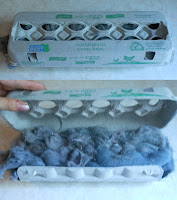 Assembly: Take an old cardboard egg carton. Put dryer lint in it.
Usage: Make sure some lint sticks out. Set it on fire.
What I like about these: They burn well, and for a good several minutes depending upon how dense you fill them. Plus, they are ridiculously easy to make. It seriously doesn't take me any more time than putting these things in the trash/recycling would. Also, my supply is pretty much self-sustaining. With the amount of laundry at our house, and the quantity of eggs we eat, I make one of these puppies almost as quickly as I can burn them, and I still manage to keep a few extra in stock.
What I don't like about these: They take up too much space if you're packing them to go on a camping or hiking trip. One or two isn't bad, but more than that and you're wasting space. You could always stack your cartons and assemble them on-site, but that's not always easy.
The Verdict: These are awesome to start your at-home fire pit, but not the greatest for camping.

Version 2: Grandma's Lint Starters
Cost: Free. You just have to melt down some used-up candles (see info below)
Assembly: Drizzle melted candle wax onto a handful of lint (over foil). Scrunch it up good.
Usage: Set the not-waxed part of the lint on fire
What I like about these: Grandma uses these for a reason: they work! I've also seen her put the lint into an egg carton before drizzling the wax, and then she'll use 2-4 egg spots as a single fire-starter. Either way, the wax slows the burn down so that these puppies last. Great for starting wet wood on fire, or if

you're short on kindling and need to start by setting a larger log ablaze. Also, they are great for day-after campfires, when you're trying to start a new fire off the embers of the last. The lint will catch easily off those embers, and you won't need another match.
What I don't like about these: They're ugly. U-G-L-Y. Not only that, they use up a ton of candle wax to really soak it into the lint right. Meaning, I can get maybe 3-4 in a batch out of a larger used-candle. Also, I don't go melting down candles once a week. You have to wait until you have a few candles to throw away before you can say "today I'm going to make firestarters".
The Verdict: Keep a couple of these on hand for starting wet wood or larger logs without kindling.

Version 3: Cotton-Wax Discs
Cost: Almost Free, the cotton-rounds are 1-2 pennies each
Assembly: Check here for the full tutorial (and see my wax melting method below) 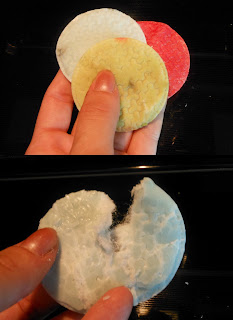 Usage: Tear the round so that the cotton is exposed, light the cotton bits on fire
What I like about these: They are small and compact, which makes them perfect for camping and backpacking. Also, I got about a dozen out of a half-used votive candle, which means I can spend an hour and get a HUGE batch of these. One alone will burn for a good 2-5 minutes. If you're starting a fire with damp wood, you'll need more than one, but thats ok because you just made like a hundred of these things.
What I don't like about these: Again, I don't use up tons of candles, so I don't have oodles to melt down. (Though these guys don't take much at all). Plus the melting down takes its own time. But that's about all the negatives I can find for these. Seriously.
The Verdict: My new favorite fire-starters. I'm still going to make the Egg Carton logs (only because I find that almost easier than throwing away the lint) and I'll use those for backyard bonfires. But these little cotton rounds are my new favorite camping accessory. 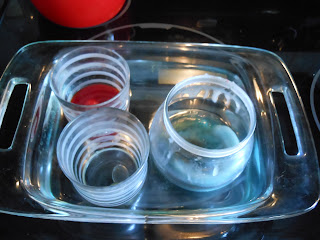 Melting Wax for Firestarters:
I'm not one to trash a pan just for wax, so here's what I did without ruining any of my cookware.
Put a kettle on to boil. And preheat your oven to 350 degrees.
Take a glass baking dish and place your candles in it. If your candles are already in glass containers, you're all set. If they're not, place them in a tin can before placing them in the baking dish.
Once the water in the kettle gets hot (but not necessarily boiling) gently pour it into the baking dish around the candle-holders. Leave enough room so that the water can slosh a bit without splashing you or the candles.
Carefully place the dish in the oven, and turn the oven off.
Allow the candles 5-20 minutes to start melting. Once they look like they're pretty much turning liquid, you can remove the baking dish from the oven, and the hot water will continue to heat them. I dipped my cotton rounds directly into the candle holders with a pair of small tongs.
Please be careful when handling hot water and hot wax!
Posted by Andrea at 12:57 PM 3 comments:

So, I recently did a few projects with lace, and became completely obsessed with it. I love the way it looks when I finish a piece, like something you would easily find with a high price tag at a boutique. No, I still haven't started that veil, and yes, the projects take about 10 times longer than their worsted weight counterparts. That said, I love the fact that a ball of crochet thread (along with the accompanying project) fits in my everyday purse instead of a separate yarn bag. That said, I managed to lose the 1.5mm crochet hook frequently. So I now carry a hook case with me as well, instead of just tucking it into the skein.

Anyways, this beautiful little Sunhat Pattern is one that I found through Ravelry. It was very accurate as far as sizing went. I used a larger hook, so I omitted one round of the center hat circle. It is sized for 1.5-3 year olds, but since it was a gift for Scarlett's first birthday I wanted to keep as close to that sizing as possible.

Yarn: Aunt Lydia's Classic Cotton Crochet  Thread (size 10) in Orchid Pink
Hook: 1.5mm metal lace hook
Pattern Link: Sunhat PDF
Modifications: I omitted one row of the center circle, and I don't recall which one. I also finished it off early, since I made the shell pattern rows longer than required. I don't think I deliberately planned any of that, I think my fingers were killing me and I just gave up. I worked on it for about 4 hours straight while on a flight layover in Atlanta. Besided, the little flowers on the edge look so cute the way they are! 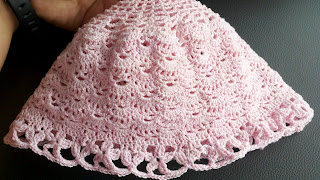 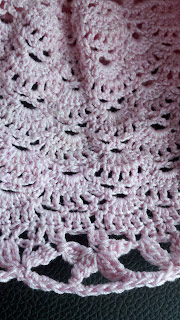 The Verdict: I love it! Can't wait for Jennifer to get some nice pix of Scarlett wearing it! 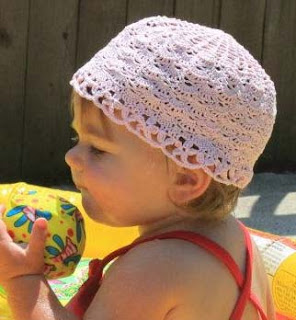