So, first and foremost, let me apologize for my long absence. It has been a CRAZY year thus far, and we're only at August!

I chose a pattern for my Lace Veil and I've been working slowly but surely away on that. I've also been busy with some home improvements. I re-did the laundry room so that I have an organized place to store ALL my bins and bins of yarn! Yay!

Anyways, all those other projects aside....

I bought the yarn for this project back at Michael's Black Friday Sale (that happens on Thanksgiving evening, instead of Black Friday). There is generally very little crowd, the deals are still incredible, and I picked up six Jumbo Skeins (744yds) of Red Heart for only $3 a piece, before my 30% Off coupon!

I know that I don't like making blankets, mainly because they take so long, but I figured that I could hold 2 strands of worsted weight yarn together to make a bulky strand, and work with a 10mm hook and it would go faster.

I planned to make a queen sized blanket, and even cast on with one of the stitches from The Complete Book of Crochet Stitches. Unfortunately, because the 2 strands I was working with were different colors, the color of the resulting stitches totally hid the pretty stitch pattern. Plus, it was a 3-row repeat pattern, which meant I spent half of my time looking up the pattern to see what row came next. I ended up shelving the project for the better part of six months.

Well, two weeks ago, the hubby and I decided that we needed a new mattress. Plus, if we're getting a new mattress, we should probably upgrade to a king-sized bed so that we have room for our 70lb German Shepherd bed hog.

"But if we get rid of the queen, we're going to need all new blankets!" I said, "and we've already got oodles of queen sized blankets for the guest-room!"

So, I pulled out the queen-sized blanket that I had started and frogged the whole thing. Yes, You heard me. I took 12" of beautiful queen sized blanket and I frogged it. And I cast on for a king.

And do you know what? I finished it. In 2 weeks. Booya!
I did end up having to hit the craft store for more yarn there at the end, but those 6 skeins would have easily finished a Queen Sized Blanket.

Ok, so here is what you came for:

Pattern: Shashaholic's Brain Dead Afghan
Hook: 10mm
Yarn: Red Heart Super Saver in Aran and Coffee (744 yds per skein, 4 skeins Aran + 4 Skeins Coffee)
Notes: I LOVED this pattern! It was easy, it was simple, and it was QUICK! 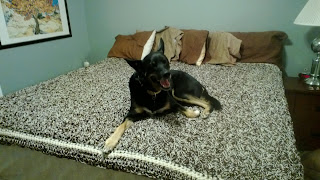 I began with ch 228, and that was about 84" after the first row. By the time I finished 6" of pattern, it was only 66"! Oh no! So that became the height of the blanket, and I just kept going until I had sufficient width. At the end, I went over the first and last rows freehand to even them out (I didn't want the wavy edge) and I added 2 rows of hdc in just white + 3 rows of dc in the mixed colors just to add a little extra flair.